Even pro cultivators can’t resist the convenience of shopping for LED grow lights on Amazon. Sure, some of these LEDs aren’t on “PAR” with those on grower-specific sites, but there’s simply no escaping Amazon’s massive reach. Plus, if you’re already a Prime member, you may get some sweet discounts on decent LEDs.

Generally speaking, LED grow lights on Amazon are perfect for beginner to intermediate home-growers. However, not all of these light models are created equal. Some LED grow lights seem to be a cut above the competition.

Four Of The Best LED Grow Lights On Amazon

While Amazon constantly introduces new LED grow lights to their virtual store, a few names have superior ratings. At least one of these top choices should fit your at-home cultivation needs.

Mars Hydro may not be a household name, but it’s a well-known brand amongst at-home growers on a budget. This China-based company has built a considerable following thanks to its affordable designs, strong lumens output, and unmissable presence on sites like Amazon.

One Mars Hydro grow light that does particularly well on Amazon is their TS-1000 series LED panel. According to Mars Hydro, this particular model has 342 Samsung diodes and is best suited for areas of about 3 x 3 feet. Each TS-1000 comes with Mars Hydro’s reflective “heat sink” design to concentrate light and dissipate heat without a fan.

Most reviewers love this light’s lightweight construction and efficiency. Amazon customers also rave about bonus features like the TS-1000’s dimmer and daisy chain attachment. However, since these lights were manufactured in China, some people complain about poorly translated instructions.

On the plus side, Mars Hydro has warehouse locations in most Western nations like the US, Canada, and Australia. So, if you need to return this light for any reason, you don’t have to ship it back to Guangzhou.

Based in California, Spider Farmer often gets compared with Mars Hydro due to their similar LED designs. While there are slight differences between these brands, they target the same customer (i.e., budget-conscious home-growers) on the same eCommerce platforms.

The ultra-thin Spider Farmer SF-1000 doesn’t have the heat sink found on Mars Hydro, which some may find more aesthetically pleasing. Despite the SF-1000’s thin construction, it also doesn’t have a loud fan.

Since the Spider Farmer SF-1000 and Mars Hydro’s TS-1000 are so similar, it can be tricky for new customers to choose between these highly-rated models. However, judging by the Amazon reviews, either of these lights will meet the expectations of home-growers on a budget.

Giixer is a relative newcomer in the “Amazon LED wars,” but it has proven to be a mighty contender. Indeed, Giixer’s no-frills 1000W LED grow light has gained a lot of praise for its efficiency and affordability.

On the cons side, Giixer’s 1000W LED doesn’t have a dimmer or a fanless design. Indeed, since this light has dual fans, it’s a bit fatter than comparable Spider Farmer and Mars Hydro models. On the plus side, the Giixer 1000W LED has full-spectrum lights and a convenient veg/bloom switch.

New customers should also know the Giixer 1000W LED doesn’t have daisy-chain accessibility. So, if you’re thinking about scaling your grow operation, you can’t easily attach all of your Giixer LEDs.

Despite these inconveniences, people appreciate just how cheap the Giixer 1000W LED is. Customers who want a simple LED that can “get the job done” will most enjoy Giixer’s popular 1000W model.

Not every indoor cultivator loves models like the GooingTop LED Grow Light. However, this style of LED is so popular on Amazon that it deserves a special mention.

Unlike the other lights in this list, GooingTop’s 6000K light looks like an adjustable lamp with a thin string of diodes. Instead of using this light in a traditional grow tent, the GooingTop LED is ideal for giving a few countertop plants some “LED love.”

Indeed, most of the ads with the GooingTop LED 6000K show it lighting succulents on a desk or coffee table. Obviously, this model won’t suit everyone’s growing style or goals. You’ll only need this light if you’re interested in passively growing a few herbs or plants without taking up too much space.

While the GooingTop full-spectrum LED may be limited in how many plants it could grow, there’s a good reason it has risen in Amazon’s rankings. People who use this light love its adjustable head and convenient “clamp” design. This LED model also has many bonus features like a timer and dimmer to help you adjust your daily light needs.

Yes, the GooingTop LED 6000K isn’t ideal for growing in a tent, but it has potential uses for people who want to cultivate a few small plants on the side.

Search For The Best LED Grow Light On Amazon

Amazon isn’t a specialty grow light shop. Indeed, most of the lights you’ll find on this site are geared towards home-growers who want a decent product at an affordable price. However, as long as you manage your expectations, you shouldn’t be disappointed with the LED brands now available on this eCommerce giant.

Whichever brand most appeals to you, it’s always a good idea to scour the official specs and contrast them with online reviews. Also, please review your spatial requirements before analyzing each LED grow light. The more info you could gather on an LED’s performance, the more likely you’ll feel great about your Amazon purchase. 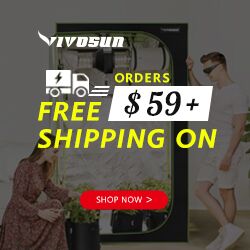 Use code AFF15 for an exclusive 15% VIVOSUN discount!